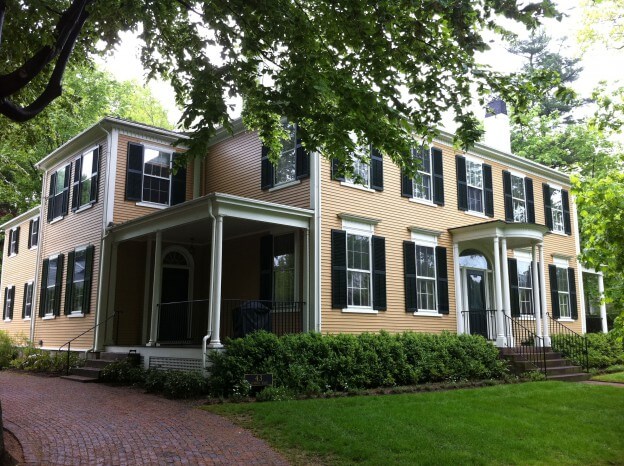 We have the privilege of tending to some of Boston’s grand old homes and we have learned that ongoing maintenance is the best approach to keep these buildings in top shape.

The photograph below is taken from a gorgeous Federal house in Brookline, one that was originally situated a ½ mile from its current location.  House wrights moved it on log rollers to its current address over 100 years ago.  Owned by an academic whose field and passion is old house conservation, the house is still largely clad in its original siding and trim.

Consistent with building practices of its time, the house is built over a substantial fieldstone basement with a concrete floor poured directly over gravel.  Every year the house manifests classic symptoms of impeded moisture transmission through the painted sidewalls.  The first picture shows the classic alligatoring that paint begins to suffer as layer upon layer of coating produces an ever thicker, impermeable and inflexible barrier. 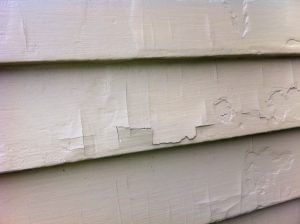 The second photo shows a more dramatic symptom, sometimes referred to as moisture bagging, wherein the original primer delaminates from the substrate in large bubbles. Pop these in late winter or early spring and voila, your very own spring water … 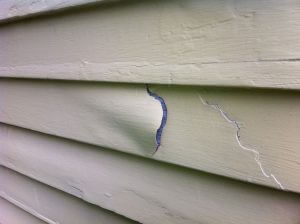 In his book Water in Buildings the architect William Rose examines the root cause of moisture uptake by older homes and concludes that permeability of the basement floor is largely to blame.  No moisture barrier prevents the house from wicking moisture via capillary action through the slab; the warmth of the building in the winter creates a chimney effect, increasing the pull of  moisture from the earth and exhausting it via attics, fireplaces, drafty windows, and, as evidenced on innumerable older homes in New England, through the sidewalls.

Unless the homeowner has the stomach to endure a thorough paint stripping project, the best approach is to patiently but consistently address the problem on an annual basis.  We also recommend limiting the number of additional topcoats; one is adequate in most cases over a properly prepared and primed substrate.  Needlessly adding layers of paint to the older home is best avoided.

Finally, it is worth noting that there is evidence that application of water-based coatings over thicker coats of oil-based paint will exacerbate delamination issues; curing of the water-based material can continue for months after application as summer and fall weather conditions can retard the the final cure.  When this does happen, it is often during the coldest and driest days of winter; and the final contraction of the new topcoat can pull the original, ancient primer off siding and trim.  Where the existing topcoat is oil-based, we faithfully touch up with oil paints.